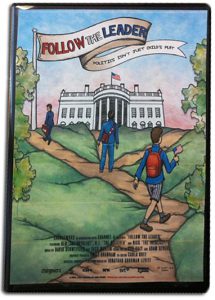 At sixteen-years-old, Ben (The Loyalist), D.J. (The Believer) and Nick (The Idealist) are high school class presidents who are each growing up in different American small towns. All initially conservative, each plans to continue leading his peers as President of the United States someday. Over three life-changing years, they split into Republican, Democratic and Independent camps as each reconsiders his beliefs and lofty ambitions – and discovers the path he truly wants to follow in life.

“FOLLOW THE LEADER is fun and provocative. It lets the individual viewer make up his own mind about what to think, rather than telling you what to think. That’s what we do [at C-Span], and for a documentary it’s much harder to do well. I can’t wait to see what happens to the participants next!”